From Kelly Girls to Permatemps

Feb. 27, 2013 — Erin Hatton, an assistant professor of sociology at the University at Buffalo, The State University of New York, discusses her book, “The Temp Economy: From Kelly Girls to Permatemps in Postwar America.” The modern temporary worker industry has grown dramatically since its origins in the 1940s and 1950s, Hatton says, but its influence extends far beyond the roughly 2 percent of workers in the U.S. it currently employs.

In fact, Hatton suggests, its power extends to fomenting a cultural reconceptualization of the value of work and workers. Instead of viewing employees as “assets” to large firms, as much mid-20th century management theory and practice held, the temp industry has thrived by convincing business owners that workers are “liabilities” to the bottom line who can and should be easily replaced. The consequences of this transformation, Hatton concludes, has left workers, both temporary and permanent employees alike, less secure.

The interview discusses all of these issues and closes with Hatton suggesting ways in which temp work could be reformed to become more worker-friendly.

Note: The home page image is described in Hatton’s book as the “Kelly Services’ Never Never Girl” ad that appeared in the January 1971 edition of “The Office” magazine. 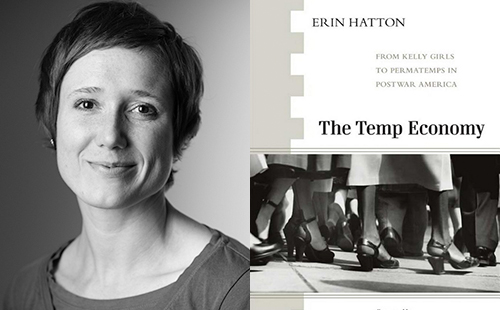